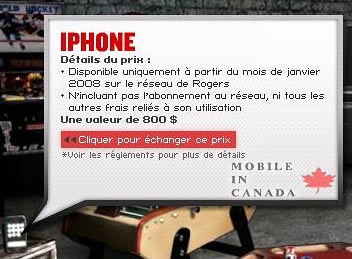 News of the Apple iPhone arriving on Canadian shores is coming from the most unlikely of sources. There’s a contest brewing at Molson Canada and the prize is an Apple iPhone to be activated with Rogers Wireless. The contest page — found here — is completely in French, so we’ve got to assume that the contest is open (only?) to the people of Quebec.

Skeptics may suggest that Molson simply got their hands on an unlocked iPhone, perhaps from France, and that’s the prize they’re giving away. Seeing how Rogers controls the only GSM network in Canada, they’re the only ones who can provide service to the touchtastic handheld in the maple leaf land.

However, a Molson representative was contacted and she said that “it’s a iPhone from Rogers.” She goes on to mention that Rogers will be launching the iPhone in January 2008, right around the time that the contest closes (January 4). They also note that the prize is “worth” $800, indicating the proposed with-contract price of the iPhone in Canada. When a Rogers media rep was contacted, they had “no comment” on the matter.