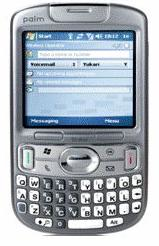 After upgrading from the Treo 650 to the 700, you found yourself itching for the Treo 750. Get ready to scratch the itch to upgrade again, because here is the Palm Treo 800w and we have word that it will launch initially with Sprint in the USA. You’ll have to take this report with a bucket full of salt, but the image provided here looks pretty close to what a Treo 800w would look like anyways, except it appears to be stretched horizontally.

Word is that the screen will be a square, rather than a landscape orientation as it is shown here. The resolution gets bumped up to 320 x 320 and the button placement is getting closer to what we have found on the Palm Centro. The Send and End buttons have been pushed to the edges, making more room for other dedicated keys, like access to the web and email.

Perhaps more notable than anything is that the CDMA Palm Treo 800w — running on Windows Mobile, naturally — has finally ditched that fugly external antenna in favor of an internal one. Early estimates have the Sprint launch date somewhere in early to mid 2008.