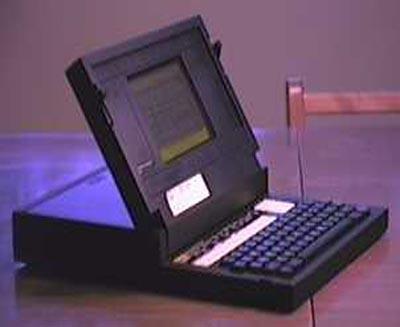 It’s amazing how far technology progresses. It feels like only yesterday that a 56k modem was the norm and having a camera on your cell phone made you the most advanced mobile chatter on the block. Going way back, I think we have found what could be the first clamshell-style laptop computer, complete with a clunky QWERTY keyboard and what appears to be a text-only display.

Pictured here is the GRiD Compass 1100, a semi-portable notebook computer that was first introduced in 1982. Naturally, the specs on this chunky beast are nowhere near what you can get today, but it was probably pretty impressive at the time. You get an Intel 8086 processor, CGA display, 1200bps modem, 240kb magnetic bubble memory, and the GRiD OS. Nope, that’s not DOS you see.

Early adopters of this machine include NASA, forking out somewhere between $8000 and $10,000 for this machine. They reportedly used it on the space shuttle.