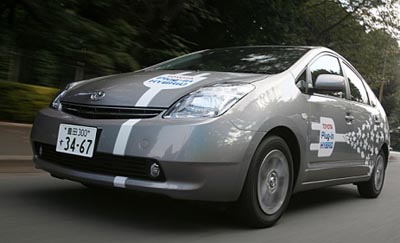 Mention the word “hybrid” and the Toyota Prius inevitably comes to mind. The same may soon be true about the term “plug-in hybrid” based on a 2009 prototype that the Japanese automaker has produced. Popular Mechanics took the mule out for a test drive, finding that the experience is much the same as the current Prius.

In fact, the 2009 Toyota Prius PHEV (Plug-in Hybrid Electric Vehicle) prototype still uses the current nickel-metal hydride (NiMH) batteries, which are far too large and not nearly efficient enough. Around the back are a pair of these batteries with the charging system wedged in between. Toyota is working on a transition to lithium ion, but they’ve run into a couple of obstacles.

As a result, there are two possible fates for the 2009 Toyota Prius. First, the compact car may launch as a regular hybrid, only switching to a plug-in when the lithium-ion units are ready to go. Alternatively, the car will launch as a plug-in but with NiMH batteries, swapping them out for lithium-ion at a future date. Whatever the case, the 2009 Toyota Prius can get all the way up to 50mph before taking its first sip of gasoline.