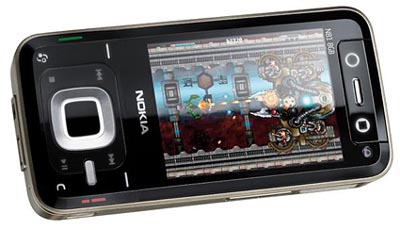 The good news is that the Nokia N81 8GB is now available for the sale. The bad news, at least for us in North America, is that the initial launch is being restricted only to Europe. You could, of course, take the import route to get your hands on this multi-gigabyte sliding wonder.

As you may have heard, Nokia is earmarking the Nokia N81 8GB as the “cornerstone of the company’s new N-Gage mobile gaming platform.” As such, many of the press photos that you’ll find — including the one featured here — shows off the phone in a gaming configuration. They hope that the Europe-bound Nokia N81 8GB will be a formidable competitor for the Apple iPhone.

To get your hands on the Nokia N81 8GB, however, you’ll have to open your pocketbook nice and wide, forking over a cool 430 Euros (about $614). The microSD-equipped version, which loses the 8GB of internal memory, sells for 70 Euros less.