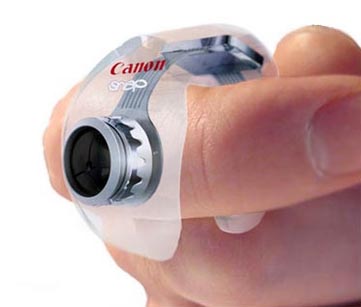 Pretty much every kind of technology is getting smaller and the Canon Snap concept takes the miniaturization of cameras to a whole new level. The fat finger ring is equipped with a Canon digital camera, theoretically taking all sorts of spy shots without anyone noticing. Seems like the kind of thing that would cater to paparazzi, stalkers, and international super spies.

No exact specifications were revealed, but the write-up says that this tiny camera is “powerful enough to give today’s bigger cameras a run for their money.” Obviously, to maintain is minute size, the Canon Snap seems to lack any sort of optical zoom, preview LCD, or advanced settings. Instead, it’s got a single button interface so you can “take a picture at a whim’s moment.”

The Canon Snap is just a concept and not one officially endorsed by Canon. Instead, it’s the techie-fueled wet dream of designer David Munscher.