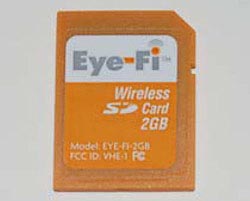 While other memory cards do little more than stash a series of 1s and 0s, the Eye-Fi SD card packs in its own Wi-Fi radio for wireless data transfers. And now the FCC has given it the go-ahead! While there hasn’t been any sort of formal announcement regarding a launch date, the FCC approval lets the company overcome its first big hurdle.

In case you missed the Eye-Fi the first time around, it’s basically a SD memory card — shown here in a 2GB configuration — but it sneaks in a WiFi connection as well. After you plug the Eye-Fi into your computer and run through an initial setup, you can insert the Eye-Fi in your favorite digital camera, getting it to beam those new photos without wires back to your computer. Very sweet.

While the Eye-Fi is perfectly compatible with Windows and Mac OS, there was no mention of support for Linux. A small price to pay for such a cool innovation.