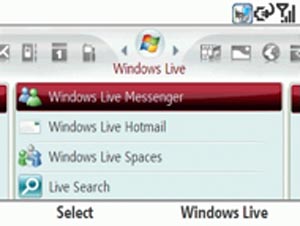 Most Microsoft-powered smartphones being released today are powered by some form of Windows Mobile 6, but it seems like the popular mobile operating system is due for another update. It’s not exactly Windows Mobile 7, but the upgrade to Windows Mobile 6.1 will bring about a whole new user interface similar to the one found on the Vodafone Treo 500v.

The innovation is being called a “carousel.” Instead of launching a series of applications, you are asked “what do I want to do today?” Along the top of the display are a number of “zones” which you navigate between by going left or right. Within each of these zones are various “actions” and these are accessed by moving up and down.

Other updates to be included in Windows Mobile 6.1 are improved WiFi connectivity, Exchange integration, and better implementation of Bluetooth technology. The announcement of the “new” OS is rumored for February with an actual launch on actual handsets tentatively scheduled for May.