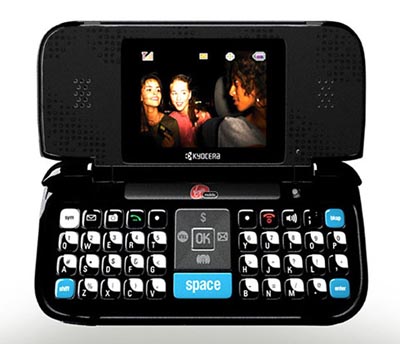 It seems clear enough that the Kyocera Wild Card, announced today by Virgin Mobile, is competing in the same market as the T-Mobile Sidekick and the LG enV, but it’s gone one rather significant leg up on its counterparts: the Kyocera Wild Card is capable of streaming music directly from the Internet.

Instead of having to download your tunes before playing them through the clamshell’s stereo speakers, the Kyocera Wild Card will give you streaming music for 25 cents per track. That price gives you unlimited streaming, but you will have to pay for each song individually.

Other specs on the music and messaging-oriented device include a full QWERTY keyboard, 1.3 megapixel camera, and Bluetooth handsfree calling. And although it is one of Virgin’s most expensive phones at $100 without a contract, it’s still relatively cheap. Bear in mind that the online music streaming requires a $2.50/month subscription to Headliner. Unlimited email, IM, picture messaging and SMS is available for $20/month.