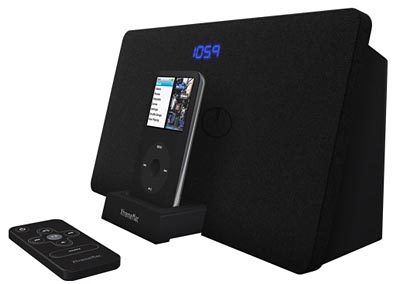 You know, making accessories for the iPod just might be more lucrative than making the iPod itself. Take this Tango Studio Audio System, for example. Yes, it looks like just about any other iPod speaker dock, but it’s got two tiny features that may separate it from all the other speakers that came before it. For starters, the actual dock is retractable, making for an incredibly sleek appearance when music isn’t being played.

The other feature is the digital clock floating in the middle, because everyone likes blue, right? I’m sure the sound quality is pretty decent too, thanks to the two full range loudspeakers and the one full stereo high-dynamic amplifier. The Tango Studio Audio System will reportedly work with the newest iPods as well, including the iPod touch, iPod classic, and iPod nano (all three gens). It will also work with the 5/5.5G iPod Video, 4G iPod, and iPod mini.

Even if you don’t have an iPod, the Tango Studio Audio System wants to show you some love via the auxiliary line-in jack. The wireless remote has a 50 foot range and when you grow tired of iPod-fueled music, there’s an FM tuner as well.