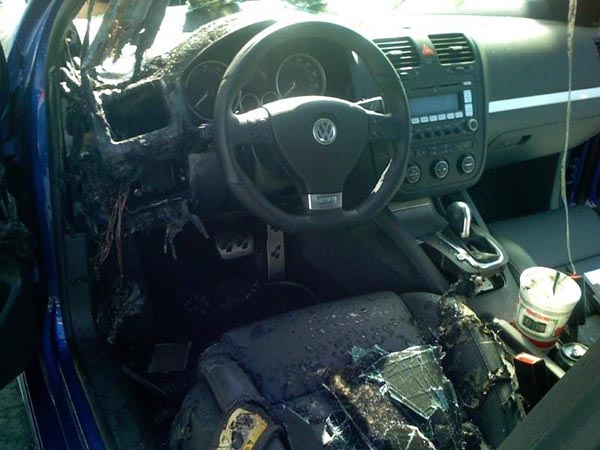 And you wonder why VW became the most recalled automaker of 2007. An unlucky fellow in South Florida came back to his brand new 2008 Volkswagen R32 when he got off of work, discovering that the hot hatchback got a little too hot. In fact, it caught on fire.

No pictures were provided of the VW on fire, but we do get several glimpses at the aftermath, including a completely melted dash, an exploded windshield, and a whole lot of undriveability. While I suspect that arson could be a possible cause, other folks are pointing toward some sort of defect. The car caught on fire after sitting untouched for six hours.

The flames started in the driver’s side dash, grew to the door and roof, and melted a hole in the windshield.

The reason why a defect is suspected is because this isn’t the first R32 to spontaneously combust. For the sake of the owner, I hope the warranty covers this.