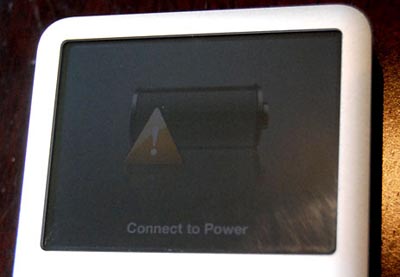 If this happened to just one or two users, you could write off the phenomenon as a defective unit or two. When it happens to several people, you start to wonder if the problem is systemic. Many iPod classic owners are reporting that they are experiencing remarkably horrible battery life on their new music and video players, and let’s face it, that’s just not acceptable.

Several members on the Apple.com discussion board are speculating on the cause. Some say that it’s because of Cover Flow. Others say that leave the clock display on when music isn’t playing can be a battery drain. Interestingly, some users “solved” the issue when they upgraded to firmware 1.02.

Do you have an iPod Classic? Have you found less than favorable battery life on your player? Maybe you should just ask for a replacement.