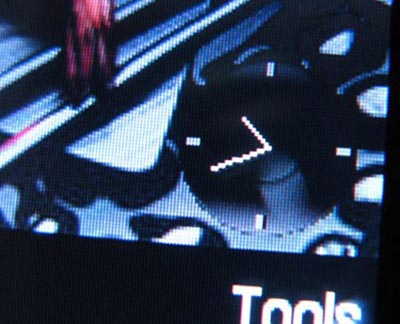 Scandal! You’ve probably heard by now about the phallic representation shown in the cock clock face on certain Motorola cell phones. While everyone who has seen the image, shown here, says that they see a penis in that clock, a Motorola statement was issued saying that it is all one big misunderstanding.

In their own words:
The image that you see is actually the result of shading applied to the clock background graphic to give it more of a three-dimensional appearance, in line with the theme of the phone. The graphic is actually built as concentric circles stacked on top of each other, with a lighting filter applied to give it depth. Unfortunately, the result is something that has some readers questioning what they see, and Motorola apologizes for any perception of impropriety as it was certainly not our intent at all.

Concentric circles? 3D shading? Maybe we all have some unresolved issues from our childhoods and we should see someone like Sigmund Freud. He’ll tell us about penis envy and how we have a tendency to see phallic symbols in everything around us. Including our phones.

In any case, Motorola is “already taking steps to ensure that the clock face graphic in question will not appear in any future products.”