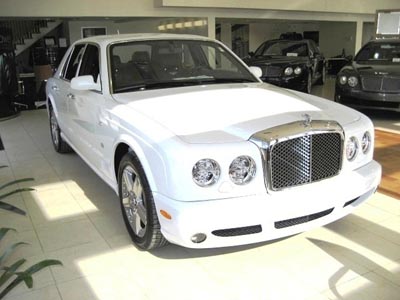 It’s out of the ordinary to find a luxury car getting its juice from a hybrid powertrain; Lexus has already shown us that. However, I think it’s fair to say that Bentley is on a whole other level of luxury, but that hasn’t stopped the prestige brand from considering a hybrid version of its Arnage ultra-luxury saloon.

The Bentley Arnage is scheduled for a redesign in 2010 and word is that the carmaker will offer the Arnage with a hybrid option. The current gasoline engine — a giant 6.75L V8 which dates back to the 1950s — will still be a part of the package, but it’ll get an added boost from an Audi-derived hybrid system.

What this means is that the next-generation Bentley Arnage can also take advantage of Audi’s quattro hybrid system, which is currently being developed for the Q7 SUV. On the other end of the spectrum is rumored Bugatti W16-powered Arnage with 900+ horsepower.

Bentley Crossover Aims To Be The Fastest SUV On Sale

A Hotter Bentley Mulsanne With 550 bhp Under The Hood Set For Debut At Paris Motor Show, Says Report

New Bentley Luxury Crossover Spied Inside Out At the Alps