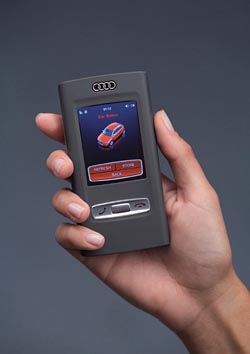 Wow, all of these touchscreen phones are just spilling out of the woodwork. Even Audi is getting in on the action with a cell phone of their own. Yup, you guess it: the AudiPhone lacks a keypad, opting instead for a touch-based user interface.

The device, which almost looks like a Nokia mobile phone if I didn’t know any better, will primarily serve as a cell phone. That said, it also boasts enough functionality to cover your MP3 player and GPS navigating needs. Still sounds like standard fare for a mobile phone, right? Well, because it’s meant to accompany your car, it’s also a remote car starter, car finder, and remote display for the cameras integrated into the car.

Not much else is known about the AudiPhone, but it sure sounds like an interesting gadget to bundle in with the Audi A1.