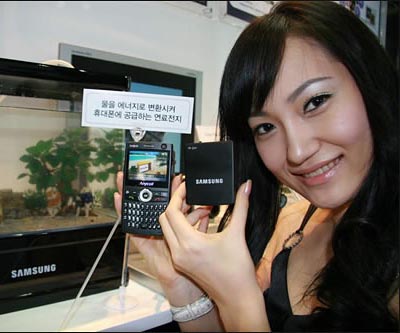 Normally when the topic of pollution, consumption, and alternative fuels comes up, most people are talking about automobiles. We’ll talk about the Toyota Prius, perhaps, and the Chevy Volt. Not today. Not in Korea. In an effort to go green, Samsung Electro-Mechanics is working on a micro-fuel cell and hydrogen generator for mobile devices like cell phones. The kicker is that it runs completely on water.

The generator has already been developed, it seems, and as they iron out the kinks and improve the system, they hope to launch a mobile phone powered by water some time in 2010. But, how does this work? After all, it’s not like hydro-powered electricity where you harnessing the current.

Oh Yong-soo, Samsung’s VP over at the research center, explains:

When the handset is turned on, metal and water in the phone react to produce hydrogen gas. The gas is then supplied to the fuel cell where it reacts with oxygen in the air to generate power.

As the Waterboy told us, H20 is much better than Gatorade. Even for cell phones.