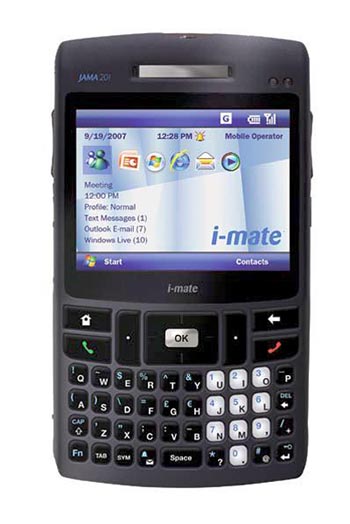 i-mate has always had a way with naming their handsets. We’ve seen everything from the K-JAM to the JASJAR and now they’ve started to toss numbers into the fray as well. Taking on a form factor similar to the HTC Excalibur, Motorola Q, and Samsung Blackjack is the newly revealed i-mate 201 JAMA. This QWERTY-rocking smartphone comes powered by Windows Mobile 6 Standard, showing off its Microsoft love on a 2.5-inch LCD screen.

Looking up and down the spec sheet, you’ll discover a two-megapixel camera around the back with autofocus and flash, as well as 128MB ROM, microSD expansion, and Bluetooth technology. Don’t expect this to be much of a Speedy Gonzalez, however, as the processor is a mere 300MHz unit from Samsung. It also sucks that there’s no 3G or WiFi under the hood either.

For connectivity, you’re restricted to some basic tri-band GSM/EDGE action. Talk time has been rated at four hours with standby ringing in at six days. No word on price or release date.