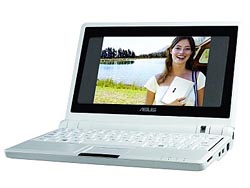 For a while there, everyone thought that the OLPC project was going to be the big success for ultra low-cost computing. Too bad for them, the Asus eee PC swept in and grabbed perhaps the biggest low-cost contract to date.

Whereas current plans only call for the manufacturing (and sale) of 120,000 OLPC units, Asus has landed a contract with an unspecified government agency, resulting in the sale of one million el cheapo mobile computers. Which country is snatching up the Asus-made laptops is anyone’s guess.

You’ve got to wonder why the sales figures comparing the Asus eee PC and the OLPC are so vastly different with the former outselling the latter by 8:1. Well, you have to note that the Asus eee can run on Windows and thus, there is much more pirated software available for it in third world countries. At least, that’s what Brian Lam thinks. It could also be because the OLPC looks like a toy, whereas the Asus eee looks more like a normal computer.