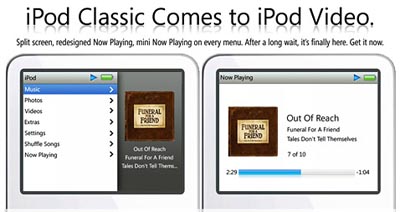 When Microsoft announced the new Zune earlier this month, they also announced that the first-generation Zune could effectively get the new software free of charge. Apple hasn’t been quite as nice with the iPod Classic, but the hackers, modders, and jailbreakers in the audience will not stand for it.

The hackers and slashers have now gotten together to modify the 5G and 5.5G iPod Video, giving it the split-screen interface found on the new iPod Classic and iPod Nano. This is because the physical hardware isn’t that different between the two generations, so it’s purely a software thing. Unfortunately, the modification isn’t completely up to snuff just yet, making the firmware “a little quirky.” It also doesn’t have Cover Flow.

A step in the right direction, sure, but the hackers still have plenty more steps to take before it’ll really feel like the real thing.