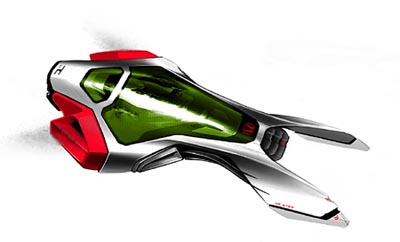 Like, seriously? The Honda 124 (pronounced “one to the fourth”) is a funky commuter car that looks like it was ripped straight out of Wipeout Pure or F-Zero. Obviously still in the conceptual stage at this point, the idea behind the Honda 124 is that it is actually four cars in one.

The marketers are saying that the 124 is “the ultimate car for carpooling, as each module comes together to form a whole car that can take advantage of HOV lanes.” I guess this means that the individual carts lock into one another to form a connected conga line of sorts. It’s also notable that each car is solar-powered. Click here to see how the whole thing works.

According to Honda’s science fiction writers, families of the future will not be able to afford a whole car. Instead, they will each one one-fourth of a car (the Honda 124), connecting with one another on the HOV lane. My, that’s bleak.