There’s no denying what Samsung is doing with their latest onslaught of cell phones. They want to get in your ear and they want to fill it with Slipknot, Marilyn Manson, and maybe a little Hikaru Utada. The Korean cell phone manufacturer has just announced three new additions to their music phone lineup, each attacking an ever-so-slightly different segment of the marketplace.

Perhaps the most powerful of the bunch is the Samsung SGH-i450. As you’ve probably noticed with Sammy phones in the past, the lower-case “i” usually indicates some intelligence and this appears to be the case here because the SGH-i450 runs on the Symbian S60 3rd Edition. This phone is a dual slider like the Nokia N95, except what slides out the top is a Bang & Olufsen speaker. Other features include HSDPA connectivity, touch wheel navigation, 35MB internal memory, and microSD expansion. The Samsung SGH-i450 is set for launch in Italy with an asking price of around 360 Euros.

The skinniest of the three is the Samsung SGH-F330, being billed as the Ultra Slim HSDPA Music Slider. The outward styling has some similarities to the U600, except the four way navigator is more square. Following in the footsteps of the F300, the F330 comes with external music controls, multi-tasking, multi-codec support, 3.6mbps HSDPA, 2.0 megapixel camera, and microSD expansion. Look for the Samsung SGH-F330 in Germany this month for about 260 Euros.

Last but not least is the switchblade of the group, the SGH-F210. This “Music Swivel Stick” actually has a numeric keypad oriented in a conventional kind of way, rather than the 2×6 orientation that some of its predecessors had. Packed with Windows Media Player 10, 1GB of internal memory, and microSD expansion. This phone will launch in Germany this month for abotu 280 Euros. 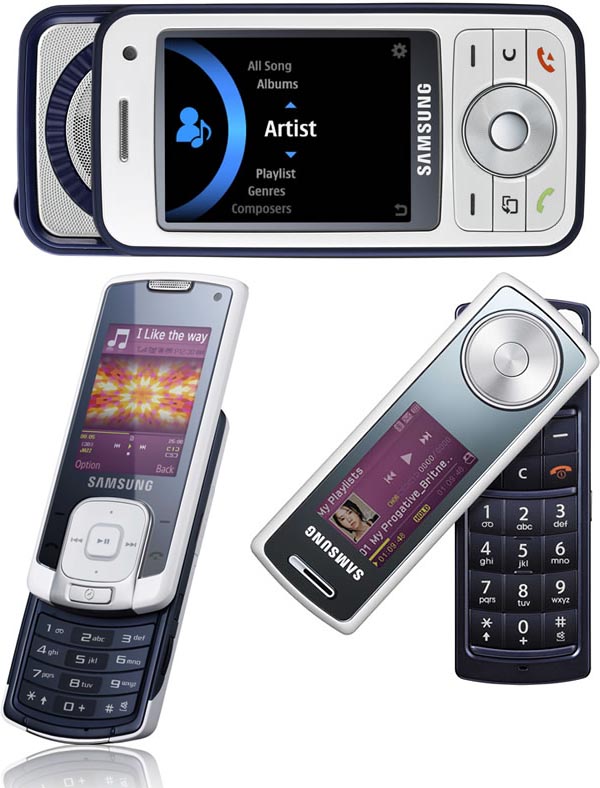