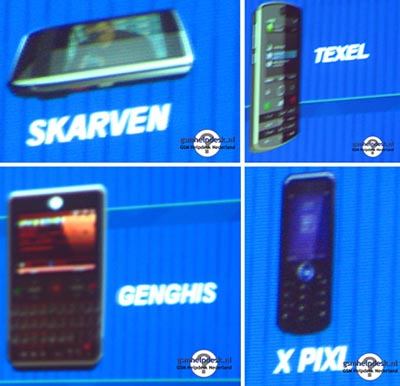 Remember yesterday when he stumbled across some blurry spy pics of what were supposed to be a quad of new Motorola cell phones? Remember how the Skarven was supposed to have an 8 megapixel camera and how the Texel was supposed to rock some sort of Kodak optics for its camera? Yeah, none of that is real.

After getting our hopes up about an onslaught of new Motorola phones, it has now been confirmed that the Skarven, Texel, Genghis, and X Pixl are “100% percent, with out a question fake.” I guess that would explain why the pictures were so low quality and coming from some random source in the Netherlands.

On a side note, there is some truth to the Motorola-Kodak partnership, because the phone — shown as the (fake) Texel here — is “still in the testing phase.” There is no name to the official product yet, nor is it in the final design phase. They’re still working on it.