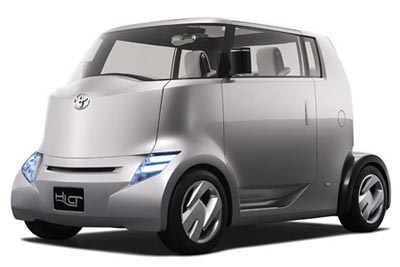 Although they’re attempting to market this vehicle as edgy and youth-oriented, I personally feel that the Toyota Hi-CT concept car looks more like a big rig truck from the future, minus the trailer. After all, look at the size of that front end and the height of your seats! Too bad the wheels look so tiny under that formidable body.

It’s quite the fascinating (and strange) design with an “over exaggerated beltline and short overhangs”. They mention that the rear deck can be used as a cargo area (with an added trunk) or space for “a pair of seats while lounging on the beach.”

It’s hard to judge the exact scale of the Toyota Hi-CT, given its awkward dimensions, but I’d imagine that they’re trying to market this to the same people as the Scion xB or other boxy people-movers. And because it’s a Toyota, you know it’s a hybrid. The cool thing is that it’s got plug-in capability.