On the plus side, we’ve come across a poster that is said to depict a series of new Sony Ericsson cell phones scheduled for release some time in 2008. On the down side, whoever found this poster failed to come back with any sort of spec sheet. Based on their predecessors, however, it shouldn’t be too difficult to venture a guess as to what these hot new handsets are going to offer.

Starting at the top-right is the Sony Ericsson W970i. This Walkman phone seems to have something similar to the iPod’s click wheel for musical navigation to go with its memory card expansion and what looks like a 5.0 megapixel camera. Going clockwise, we have the Cyber-shot K830i, a picture-oriented candybar, presumably, with a 3.2 megapixel camera.

Finally, there is the Sony Ericsson K860i, which will probably be similar to the K830i in many ways, but improve upon it in some way. You’ll notice that the K860i comes with those round buttons, much like those found on the K810 camera phone. Whether any of these images are legitimate or not is anyone’s guess. 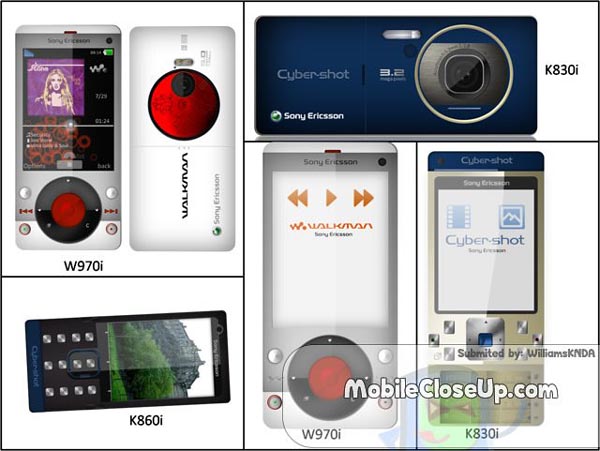