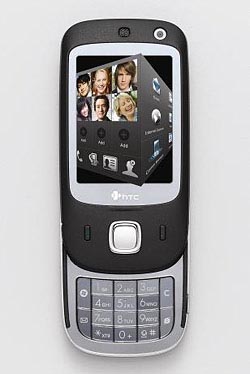 When HTC announced the Touch Dual a little while back, we were shown a slide-out keyboard that wasn’t quite QWERTY. The keypad was probably closer to SureType. I guess Orange UK didn’t like that idea, because their version of the HTC Touch Dual comes with a conventional numeric keypad instead.

Instead of the 20-keys found on the original, the Orange version — which isn’t actually orange, of course — comes with 16 keys. You’ve got your standard 4 x 3 grid for numbers, star, and pound, and then these are flanked by what appear to be buttons for Windows, email quick access, clear, and Internet Explorer.

What do you think? Do you prefer full QWERTY, SureType, or numeric on your smartphone? Bear in mind that this is the first vertical slider from HTC.