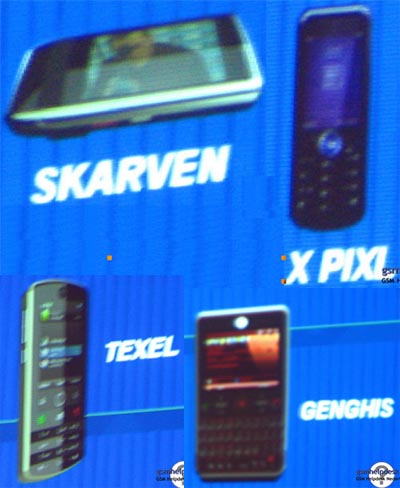 It looks like Motorola might be ready to drop the four-capital-letter naming scheme, because here is a look at four new Motorola cell phones, possibly scheduled for a 2008 launch. Then again, these could just be platform codenames and we could end up with a whole family of SLVRs, PEBLs, and ROKRs.

First up is the Motorola Skarven, an iPhone-looking handset that boasts an incredible 8 megapixel camera, VGA videos, WiFi, 3G, and GPS. The Z12 X Pixel, designed in tandem with the crew at Kodak, is similarly inclined with its 5 megapixel camera. The Skarven and the X Pixl are a part of Motorola’s new ZOOM classification of camera-centric handsets. Look for them at the beginning of ’08.

The Texel seems to have a completely flush front side, possibly with touch-sensitive keys in place of physical buttons like the ROKR E8. In fact, its musical tendencies will probably place it in the ROKR family, although it does boast a 3.2 megapixel camera. To be released as the ROKR E10 3G, the Texel is scheduled for Q1 2008.

Last but not least is the Motorola Genghis, a smartphone that belongs to the Multi Q family of phones. The business-minded handset features a full QWERTY keyboard, what looks like Windows Mobile, and probably a camera of some sort. Think of it as an upgraded Moto Q.