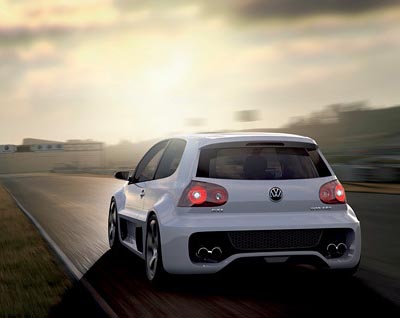 This car doesn’t even sound like it is physically possible. The crazy kooks at Volkswagen have decided to replace the rear seat and trunk in a VW Golf GTI with an unbelievable 6.0L W12 engine, developing 650 raging stallions of power.

The name of this particular concept — which is actually driveable and reasonably functional — is apt, because they’ve christened the experiment as the VW Golf GTI W12 650. It doesn’t get much more descriptive than that. The huge air intakes on the side are needed to cool the beast of an engine, bloating out the lower half of the car. It’s six inches wider and three inches lower than a normal Golf.

Jeremy Clarkson of Top Gear took the Frankencar out for a track test and found that while it may look like a regular Golf from the inside, it feels like a totally different animal when you give it a little gas. That’s why it can go from zero to 62mph in just 3.5 seconds before topping out at 202mph. Too bad it can’t turn.