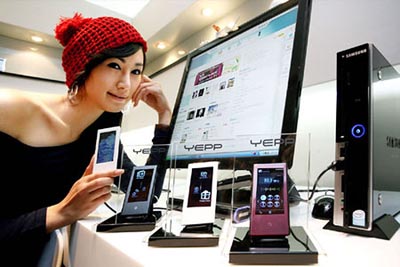 I personally like the physical design of many Samsung products. The YP-K5 MP3 player, for example, is quite the attractive piece with its slide-out speaker and touch-sensitive controls.

Possibly in an effort to compete against the recently announced iPod touch, Samsung has launched the Samsung Yepp YP-P2, a personal media player that boasts a touchscreen display. Surely, these can’t be the first touchscreen media players, but the comparisons are inevitable. The touchscreen measures three inches across the diagonal, rocks a 480×272 resolution, and has a beautiful 16:9 aspect ratio.