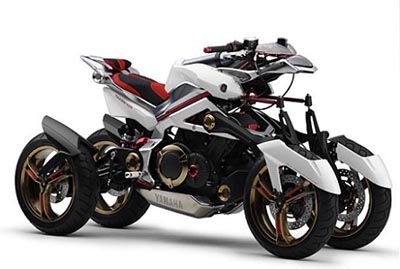 Here’s a rather confusing, yet utterly awesome vehicle for you to consider. The Yamaha Tesseract concept looks and drives basically like a motorcycle, except for the fact that it has four wheels instead of two. In many ways, the leaning “bike” (it really looks like two bikes parked really close to one another) takes the idea behind the Piaggio MP3 and other three-wheeled motorcycles and adds a fourth wheel to it.

Yahama is saying that the Tesseract concept is about the same width as a motorcycle and it leans like a bike too, meaning that you should still be able to weave your way around those cones (or lanes) and parking should be a piece of cake. In an effort to go green, the company has also announced that the Yamaha Tesseract will be a hybrid, getting its power through a V-Twin engine and an electric motor. No word on power output.

You have to admit that the Yamaha Tesseract is one funky-looking concept and it’ll certainly catch a few eyes at the Tokyo Motor Show this month.