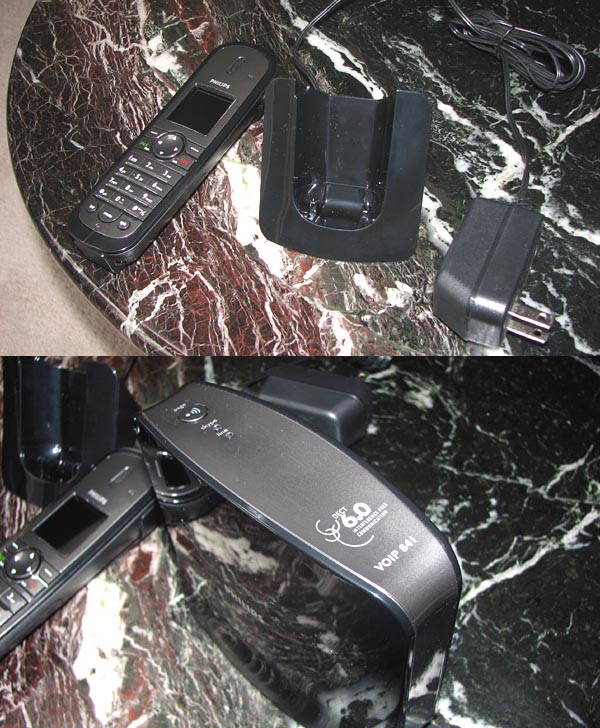 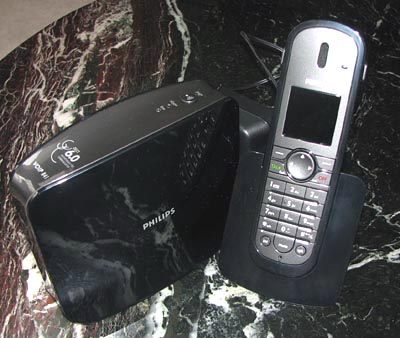 Long distance charges can get very expensive and that’s one of the reasons why Internet telephony services like Skype have become so popular. For the longest time, Skype was something that was reserved for the computer, but with the release of devices like the Philips VOIP8411B/37 cordless phone, a PC is no longer needed. Better still, this Philips cordless phone can handle your regular landline calls too. Just not at the same time.

Given that the VOIP8411B/37 (the model name just rolls off the tongue, doesn’t it?) is made by Philips, the same people that produced the Skype-loving SPC325NC webcam and headset, I didn’t have the highest expectations. After all, the build quality on the webcam wasn’t exactly the best and I wasn’t exactly impressed with the quality of the video either.

Thankfully, the VOIP8411B/37 cordless phone is nothing like the aforementioned Philips webcam and headset. Instead of a boring grey and black motif, the cordless phone, its charging base, and the wireless router have been outfitted with a beautiful piano black finish. The phone is nice and glossy, but it’s as much of a fingerprint magnet as you would imagine. Sure, it attracts a certain level of dust and the odd fingerprint, but it’s nowhere near as bad as, say, the LG Chocolate Phone.

Up To Four Handsets To One Base

This Philips Skype phone system is quite versatile. The core system — VOIP8411B/37 — comes with a single handset, a charging base, and a wireless router, but there are additional handsets for sale on their own. This is because that wireless router is capable of handling up to four handsets, but you have to remember that you’re sharing a line, so it’s not like you can have four separate conversations. At least, I don’t think you can.

As I mentioned, the phone system works over Skype without being connected to a computer, but it can also let you yak it up over a conventional landline. It should be noted, however, that you cannot maintain both a landline and Skype call at the same time. One will interrupt the other, despite this being a “dual phone.” This means that you cannot participate in three-way calls or conference calls either. This is definitely a bit of downer for anyone who wants to talk to multiple people, but the inability to put a Skype call on hold while taking a landline call is perhaps even worse.

Moreover, while there is a charging base, the individual handsets do not make use of some sort of strange propriety battery. Instead, it’s just a pair of NiMH AAA batteries. They’re Philips-branded, but you could easily swap them out for whatever NiMH batteries you want. The two provided batteries are supposed to provide enough power for 120 hours of standby or 12 hours of talktime.

Other Features and Specifications

On the handset, there is a tiny 128×128 pixel CSTN color display. Through this, you can access the entire menu and make whatever changes (and calls) that you want. I would have liked a bigger, clearer screen, but this one seems to do its job.

Using the internal memory, you’ll have enough room to store up to 500 Skype contacts, accessing them through a menu on the aforementioned color screen. When you make a regular call, there is the option to choose between using the landline or your SkypeOut minutes. Before doing the latter, you’ll need to sign into your Skype account on the phone, of course. This needs to be done only once.

Other key features include a loudspeaker on the back, polyphonic ringtones, both pulse and tone support. The wireless router is very easy to setup, requiring just three cables: the power adapter, your landline, and an Ethernet cable from a broadband Internet connection.

I love the idea of bringing Skype to the living room, as it were, by removing the PC from the equation. This will surely help to bring VoIP into the mainstream, because people no longer need to fumble through any sort of confusing software on their computers. It’s also helpful because the computer need not be on to make a Skype call. The Philips VOIP8411B/37 really feels like a “regular” cordless phone. In fact, it’s better.

The voice clarity isn’t fantastic and I found that there was some static on landline calls. It was an acceptable level for the most part, but it was definitely noticeable. The build quality is good and I love the piano black finish. The price — around $130 or so — isn’t exactly the cheapest in town. The dual phone functionality and the PC-less Skype calling are excellent, though.