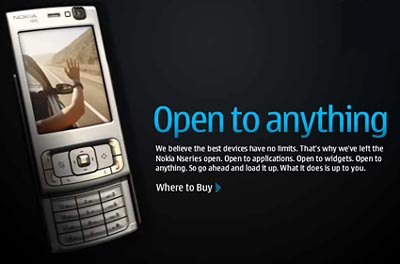 It’s pretty clear who Nokia is targeting with their latest advertising campaign, reminding consumers that their N-series smartphones are completely open. Naturally, they’re making reference to the Apple iPhone and its exclusivity agreement with Cingular AT&T.

And you all know about the restrictions on the iPhone that go far beyond “just” a carrier lockdown. By contrast, Nokia is telling us that they “believe the best devices have no limits. That’s why we’ve left the Nokia Nseries open. Open to applications. Open to widgets. Open to anything.” Sure, this ad campaign may be a little childish, but it’s a spot-on attack.

Because Nokia has their own stores set up too, it means that they can freely sell unlocked cell phones (at unsubsidized prices). Contrast this to most Windows Mobile smartphones — like the AT&T Tilt — which must be unlocked before making the trek over to another carrier.