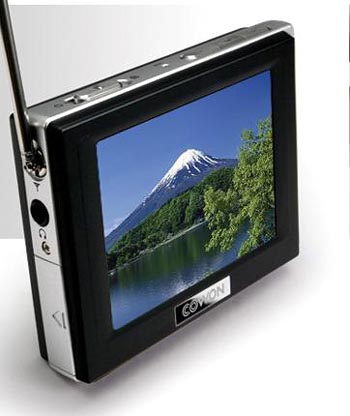 Portable media players are wonderful devices, especially if they boast some sort of mobile television solution. The antennas can be quite the eyesore, however, and that’s why the signal grabber on the Cowon D2TV is removable. When you want to watch some 1-SEG television on its 2.5-inch QVGA display, you simply screw in the detachable antenna and you’ll be good to go. Want to just watch the stuff on internal memory? Then ditch the antenna.

You’ll notice that there aren’t all that many buttons on this device. That’s because the primary interface is through its touchscreen display. In addition to the internal memory (which we believe is flash-based), there is also an expansion slot that will take SD, MMC, and SDHC memory cards. File support is plentiful too, with love for videos at 30fps, a smattering of music (MP3, OGG, FLAC, etc.), a handful of pictures (JPEG, BMP), and also TXT.