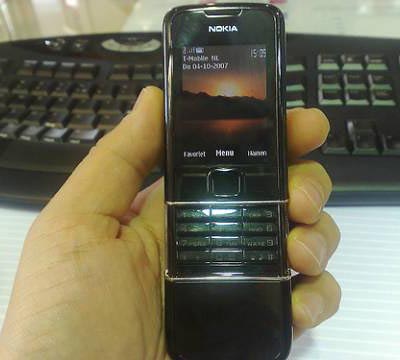 We all know that the Nokia 8000 series represents a series of cell phones that may not boast the most advanced features, but they do boast some of the best materials and build quality in the industry. Over at the FCC, there’s a mobile phone being tossed around that we think is the Nokia 8800e, but for the most part, it looks identical to the Nokia 8900. This leads us to wonder, are these actually two similar but separate phones, or are they one and the same?

Nokia has filed a confidentiality agreement with the FCC that will restrict much of the information surrounding this secretive high-end slider phone, but we can certainly glean a few details. You can plainly see that it rocks a stainless steel construction and flipping around onto the back, you also see badging that indicates 1GB of internal memory.

Like other Nokia 8000 series mobile phones, there is a sliding cover for the keypad. When closed, you get a slick all-black and glossy phone that just exudes class and prestige. More information will hopefully be revealed on or around October 16th when the FCC confidentiality agreement expires.