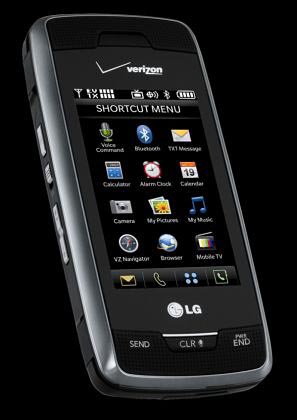 The lineup of cell phones for this holiday season has been revealed by the team at Verizon Wireless and perhaps the most notable entry is the LG Voyager, a touchscreen phone that looks almost the same as the Apple iPhone.

Remember how Verizon passed on the iPhone? That’s because the LG Voyager might even be better. It also has a large external touchscreen, but when you open the phone laterally, a QWERTY keyboard emerges for text entry. Key features include high-speed wireless broadband, a web browser, music player, and microSD expansion.

The other three phones are the BlackBerry Pearl 8130, the LG Venus, and the Samsung Juke. The LG Venus will come equipped with dual front screens, the lower portion has touch input and vibration feedback. The music-centric slider supports microSD, Get It Now, and V Cast. The swivel-style Samsung Juke is compact, has 2GB internal memory, and plays a variety of music.

All four phones are expected to hit Verizon kiosks by Thanksgiving.