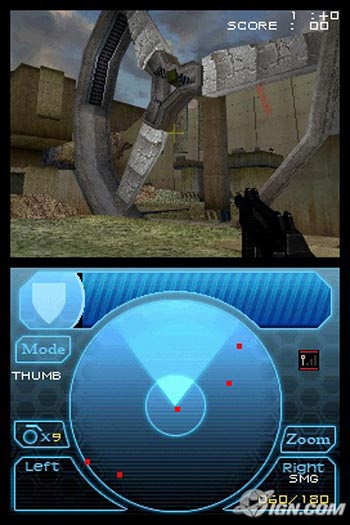 There’s so much hub-bub over Halo 3 for the Xbox 360 that many people have forgotten that Bungie almost completed a version of the popular FPS for the Nintendo DS. And we have video proof with a working demo of the game. while everyone else is fumbling around with their Xbox 360 controllers, one IGN editor went hand-on and got touchy-feely with Master Chief via Nintendo’s touchscreen gamer.

We’re not sure who was actually going to publish this game, but we hear that it was going to be a “major publisher”. Naturally, Microsoft stepped in a big disapproving smack across the forehead to say that there will be no Halo DS, even if it is utterly awesome and totally better than any first-person shooter currently offered on the Nintendo DS. Licensing the game for Shigeru Miyamoto? I think not.

The early build is not without its glitches, but that’s to be expected. The person who got to play Halo DS said that it was “appropriately accurate to the Halo experience.”