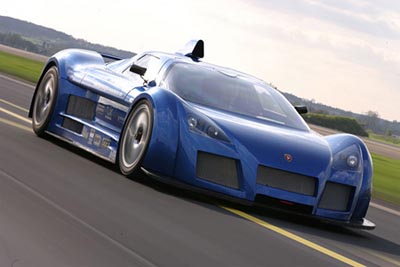 It’s one thing to build a car that is ridiculously fast, but it’s another feat altogether to make it street legal. The Gumpert Apollo satisfies both criteria with a blazing 650hp engine shoved into a 1100 kilogram package.

Tipping the scales at a mere 2425 pounds, the Gumpert Apollo is 100% street legal and it is 110% fast. In addition to the horsepower count, the 4.2L V8 engine courtesy of Audi pumps out an impressive 627 lbs-ft of torque, making the two-seater quite the competitor for cars like the Porsche 911 GT3. Featuring a mid-engine, rear-wheel-drive configuration, the Gumpert Apollo is outfitted with either fiberglass or carbon fiber body panels.

Taking it for a trip around the track, the Fifth Gear guys tell us that the six-speed sequential shifter is Formula 1-influenced, the estimated top speed is 224mph, and the 0-62mph time is a mere 3.0 seconds.