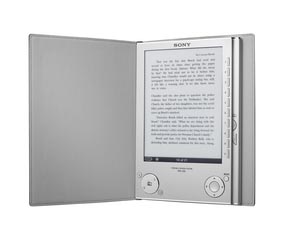 The first Sony Reader has been met with rather limited success, but that’s not going to slow the electronics giant down from releasing its successor. The e-ink e-book reader is great for reading documents on the go, because it only needs power to change the image on the display, making for some fantastic battery life.

The new Sony PRS-505 Reader will be available in either silver or dark blue and boasts a faster response and a higher contrast ratio compared to its predecessor. It’s not a color display, but there are eight levels of gray scale to give you reasonable image and graphics clarity. There’s no explicit mention of capacity, but we hear that the internal memory is enough room for “up to 160 typical eBooks” with extra space coming from Memory Stick Duo or SD memory cards. The reader is also USB Mass Storage compliant.

Look for this hot reader to sell for about $300, including a color-coordinated protective soft cover.