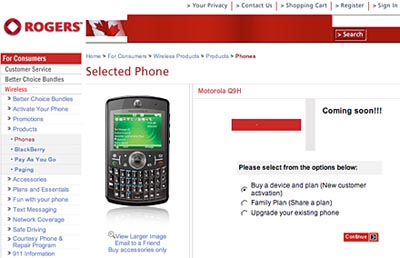 We got inside word that Rogers Wireless would be picking up the new smartphone at some point, but now it has been confirmed on the company website as “coming soon.” The Canadian GSM mobile operator has yet to release details concerning any sort of release date, but it is reassuring to any Motorola aficionados in the audience that the forthcoming Q9h is confirmed for north of the 49th parallel.

As it is “coming soon”, the Motorola Q9h is not yet ready for purchase so we’re still left guessing as to how much it will cost and if there are any features that will be crippled or disabled in any way. It’s also notable that since Rogers has been testing the HSDPA waters lately in the Eastern part of Canada that the Motorola Q9h could take advantage of those faster wireless speeds.