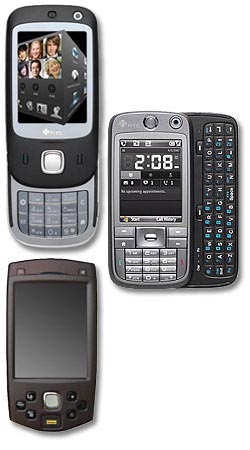 High Tech Computer (HTC) is probably one of the biggest manufacturers of Windows Mobile-based devices in the world, even if the phone you happen to be rocking doesn’t have any HTC badging on it. The company has made quite the effort in getting their own name out there recently and this latest trio of handsets will surely win over more than a few hearts. And all three boast Windows Mobile 6.

The Touch Dual was previously being bandied about on the blogosphere simply as the Touch II. Basically, the HTC Touch Dual takes the beautiful TouchFLO interface found on the original Touch and adds in a slide-out numeric keypad. This is the first HTC phone to have a vertical slider. Other niceties, as you recall, include HSDPA, 2 megapixel camera, microSD expansion, and tri-band GSM/EDGE.

The HTC S730 can be thought of in any many ways as an upgrade to the HTC Vox platform. In its closed position, it looks like a candybar, but a QWERTY keyboard slides out the side for easy mobile emails and text messages. Like the Touch Dual, the S730 also has HSDPA. Rounding out the specs are GSM/EDGE, WiFi, and Bluetooth 2.0.

Last but not least is the business-oriented HTC P6500 with Windows Mobile 6 Professional. The 3.5-inch screen is quite large and the 3 megapixel camera with autofocus sounds pretty good too. Other features include integrated GPS, HSDPA, WiFi, Bluetooth 2.0, dual SD card slots, 1GB internal memory, and a fingerprint scanner.