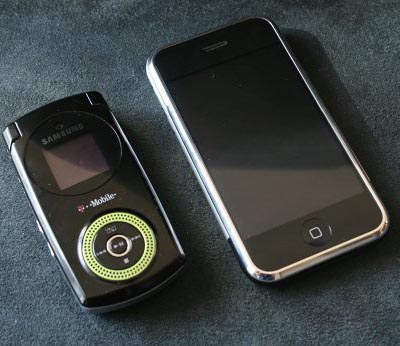 Beat it (Beat it)… And the Beat goes on…

Jason Chen from Gizmodo gave the Samsung Beat from T-Mobile a test drive and his verdict is that the Beat is a “pretty decent music phone” for $99. It’s not exactly anything spectacularly awesome in any regard, but it seems to deliver just about everything that it promises.

As you recall, the music flip phone comes with 2GB microSD support, a 1.3 megapixel camera, stereo Bluetooth, quad-band GSM, myFaves, and a “round green speaker on the front for impromptu dance-athons.” Jason says that the speaker is “plenty loud” and the external music controls are “plenty convenient.” He’s also glad to see that the internal music user interface is much improved.

Sound quality, both incoming and outgoing, is solid and the graphite-esque texture on the keypad is also quite nice. In the end, Jason says that he gives the Samsung Beat a “thumbs up for regular folks who aren’t interested in smartphone functions.”