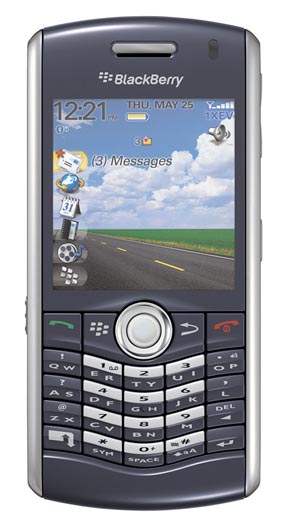 The BlackBerry line of devices from Research in Motion has generally been offered in both GSM and CDMA flavors, but for some time now, CDMA lovers have left out in the cold from the love of the slim Pearl. That has now changed. The BlackBerry Pearl 8130 has officially been unveiled by RIM, sending the SureType-toutiing device into the hands of CDMA users.

The BlackBerry Pearl 8130 will rock high-speed Internet access via its EV-DO connectivity and they mention that this high-speedness will also include the possibility of streaming 3GPP videos onto the phone via YouTube Mobile and other similar sites. The other major signal grabber found within is “real GPS”, complete with BlackBerry Maps for driving directions and local searches.

Rounding out the features are music support, a full-size 3.5mm headphone jack, microSDHC expansion, a 2 megapixel camera, and improved noise cancellation on the microphone. Look for the Pearl 8130 to hit Sprint and Verizon, as well as either Telus or Bell, around November. The likely asking price is in the neighborhood of $200 with a new contract.