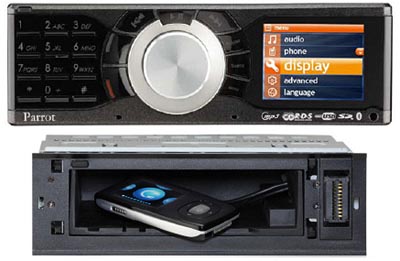 It looks like the Blaupunkt Melbourne SD27 isn’t the only car stereo to say goodbye to the now obsolete CD format. The RK8200 head unit from Parrot does not have a CD slot of any kind, instead relying on its USB port, SD card reader, line-in jack, iPod connector and Bluetooth A2DP stereo connectivity to get its digital hands on some digital music.

I personally don’t think that the Parrot RK8200 is particularly attractive from an aesthetic point of the view — with a giant knob in the middle, a half-lengthed display, and a boring phone keypad on the left — but the features sound pretty darn nifty. I guess that’s what you get from a company that normally specializes in Bluetooth gear rather than car stereos.

One thing that is kind of cool, above and beyond the lack of a CD slot, is that you can actually stash a bunch of your gear inside the head unit. This is because it doesn’t need that space for a CD slot or a disc-reading laser. They also mention that it has enough internal memory for “over 300 MP3s.”

The Parrot RK8200 car stereo is scheduled to ship to UK customers by the end of the year with an asking price of about $302.