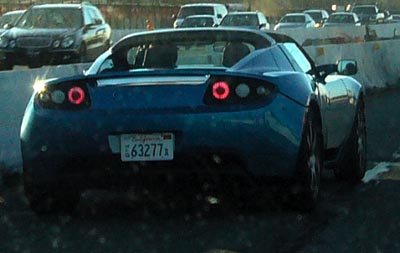 Although the electric sports car has been delayed until Q1 2008, that hasn’t stopped the manufacturers from taking the roadster out for a real world test drive. The Tesla Roadster was seen cruising along US Highway 101 between San Francisco and Redwood Shores. As expected, the license plates on the back belonged to the State of California.

The spy shot isn’t of the highest quality, but it does give you a glimpse into what the production Tesla Roadster will look like when it officially hits American streets early next year. As you recall, the EPA has certified that the electric sports car is capable of a 245 mile range, which is less than what the executives were predicting. Then again, when a full electric can do a 0-60mph run in less than four seconds, you’re probably not going to hear too many complaints.

A few “pre-production models”, like the one spotted in California, will be manufactured this year but you won’t be able to buy any of them.