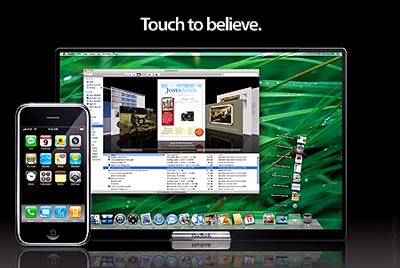 Steve Jobs seems to have acquired a fetish for devices with touchscreen displays. It started with the Apple iPhone and it’s multi-touchtastic wonderfulness. He then translated that device by ripping out the phone part, creating what we now know as the iPod touch. But what about going bigger? What about revisiting the Newton?

The latest rumor to get stirred up in Cupertino is a MacBook Touch, which is basically an Apple-branded UMPC running on Mac OS X and rocking a multi-touch display. It’s not going to be huge though, because the current rumblings are saying that the MacBook Touch will be about 1.5 times the size of the iPhone. The screen will only have a resolution of 720×480, making us think that it’s more akin to a PDA than a UMPC.

Yes, just a rumor and a concept, but it’s one that might be pretty popular among Apple fanboys.