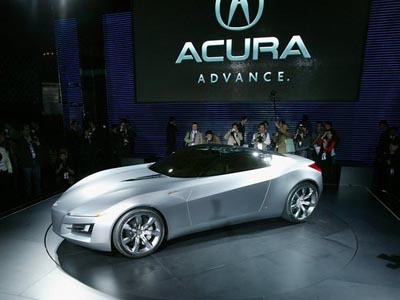 I drive a four-banging Acura myself. It’s not the fastest car in the world, but it gets me from point A to point B without a little bit of zing. As the luxury wing of Honda continues to push further upscale, Acura is considering the implementation of V10 in their cars, instead of opting for V8s like most of its direct competitors.

The company plans on “testing the waters” by placing a V10 in the next-generation NSX, an exotic supercar that will probably be based on the Acura Advanced Sports Car Concept seen here. If the public receives those ten cylinders favorably, Acura may move to place V10s in some of its other cars as well, like the MDX or RL.

Typically, V10s are only placed in the most expensive of sports cars. The closest to a mainstream V10-powered car is probably the BMW M5, but Acura may “use less powerful ten-cylinder engines in its more premium models.” You have to ask, though, what’s the point of that?