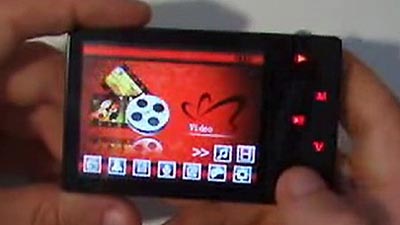 Motion-sensitive technology isn’t exactly new, but it seems like it has largely gained in popularity since the introduction of the Nintendo Wii last November. The latest motion-sensing gizmo is the Pasen ShakeIT portable media player. Who needs buttons when you can switch tracks with a flick of the wrist?

That’s obviously the biggest selling point on this otherwise conventional music and video player. To shuffle through pictures, choose menu items, or jump to the next song, all you have to do is shake the player to the left or the right. It’s not quite as amazing as playing a rousing session of Wii Sports: Tennis, but it’s certainly a feature you’ll be hard-pressed to find on another player.

Other highlights include the 2.8-inch QVGA display, 2GB internal memory, Microsoft PlayFX suite, 3D headphone effects, and volume normalizing. It must be annoying with the tracks jumping all over the place when you go for a jog, though.