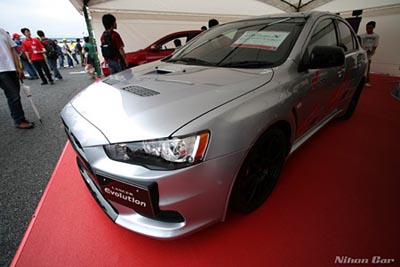 I’ve been seeing a lot of the new Lancers on the road here in Vancouver. My cousin just got one not that long ago and he loves the aggressive new look on the sports sedan. The new front fascia is unmistakably awesome. While we’re still waiting for the official unveiling of the Evo X, someone has managed to snag a peek at the 2009 Lancer Evolution X Ralliart.

If you thought the production model Lancer was more aggressive, you’ve got to take a peek at this beast of a compact. Spotted at Motor Sport Japan 2008, the Evolution X Ralliart comes equipped with countless aesthetic and performance upgrades, but Mitsubishi officials were pretty quiet on the specifics.

At least there’s a video. Try to avoid drooling on your keyboard.