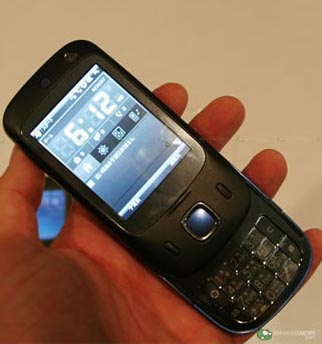 And now it’s official. This phone has gone through a lot of different names in its very short history. Some call it the HTC P5500; others refer to it as the Touch II; others still maintain that the codename is Nike. Whatever you call it, the HTC P5500 Touch II Nike has been officially unveiled.

Powered by Windows Mobile 6.0 Professional, the touchscreen smartphone is going to make its debut on the NTT DoCoMo network in Japan. The mobile operator will be selling the phone as the HTC HT1100. Yes, a fourth name for the exact same device. It’s notable that the Touch II is the first HTC phone with a vertical slider.

In case you missed it the first few times around, the HTC Nike comes equipped with a TouchFLO interface (designed to compete against the iPhone), HSDPA connectivity, a 2.6-inch touchscreen, 802.11a/b/g WiFi, SIP support, Bluetooth, dual cameras, and a microSD expansion slot. No word on pricing.