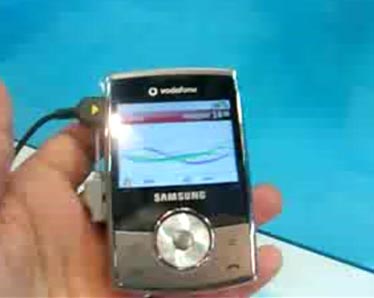 Just because you want to get your hands on some QWERTY doesn’t mean that you need a big bulky cell phone. The Samsung SGH-i640 is one such example, because the very compact slider phone doesn’t have a conventional keypad, going instead for a tiny QWERTY keyboard.

Shown here with Vodafone badging, the Samsung SGH-i640 is cosmetically similar to the SGH-i620 which preceded it. There are several upgrades, naturally, equipping the i640 with WiFi, GPS, Windows Mobile 6 Standard, UMTS/HSDPA, and a 2 megapixel camera.

Although I appreciate the compact form factor and the cool touch sensitive controls on the face, I’d image that the minuscule QWERTY would be a pain to use.