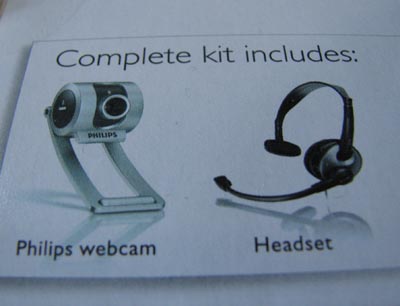 Last week, I gave you a quick hands-on video with the Philips SPC325NC Skype Starter Kit. I’ve had the chance to take the combination out for a test drive and while I feel that both the webcam and headset are solidly constructed, their performance leaves much to be desired.

What’s In the Box?
As I mentioned in my preview video, there are two primary components to this Skype starter package from Philips. You get a webcam that is supposed to handle video as high as 30fps and then there’s a wired headset for the actual chatting part of the equation. Outside of this, you get the standard stuff like an installation CD and a quick start guide. The glossy white box is attractive enough with plenty of happy people displayed on the front, side, and back. They really want to push the point home that this kit is designed to let you “start videocalling on Skype.”

SPC325NC Webcam: Still Pictures
According to the official specifications, the webcam included in this package is supposed to be capable of capturing still images at up to a VGA (640×480) resolution. What they quietly mention is that the native resolution is actually just CIF (352×288) and it is through interpolation that you get the resolution bump to VGA.

The included software — Philips VLounge — is reasonably easy to use, but you really start to notice the poor resolution when the preview window is blown up… and I’m not even talking about full screen mode. Even in standard windowed mode, the image is blurry and the color quality is quite poor. You can tell what you’re looking at, but don’t expect much in terms of details. You can also use the default Windows application to capture stills, but the picture quality is just as bad.

Because of the very blurry pictures, adjusting the focus by rotating the lens is pretty tricky. It actually took me a while before I was reasonably satisfied with the focus. I do find it handy that there is a quick access button on the side of the webcam that automatically launches the snapshot function. The button on the other side of the button launches the VLounge advanced application. 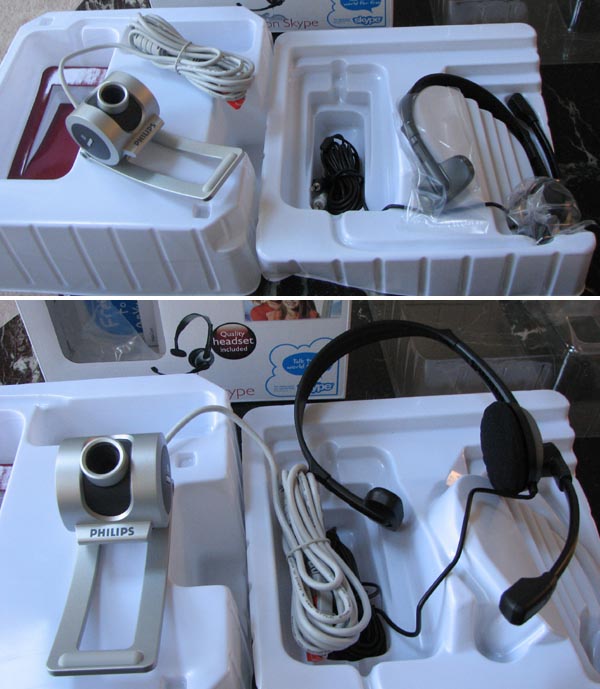 Webcam: Doing the Video Thing
Again, while Philips did a good job with maintaining a DVD-quality 30fps for the frame rate, the poor resolution makes for a less than satisfying video experience. Assuming that you have a broadband connection, you should have too much trouble with streaming video and audio to your friends on the other side of the country, so there’s no excuse to not get a better resolution out of this package. I am pleased with the frame rate, don’t get me wrong, but the picture quality is poor. Could it be that Philips is trying to protect people with less than fantastic Internet connections?

Honestly, I don’t think that the resulting videos recorded using this webcam is even usable for YouTube. You’re better off using some sort of standalone digital camera and just making use of the video function in that. Then again, at about $30, this Philips webcam is considerably cheaper than any digital camera on the market.

Build Quality and Usability
The construction of the webcam is just fine. The materials feel a touch on the cheap side of things, but I never had any problem with loose seals or other poor build quality issues. The vertical adjustment of the camera is handy, and I like the idea of the adjustable arm. According to Philips, they want to “make things better” and this arm is just one way they’re trying to do that. Using this arm, you can place the webcam on a desk and have it pointing upwards or you can attempt to “clip” it to your monitor and have it looking down at you. Because of the swinging nature of this “stand”, the SPC325NC will work just fine on LCD monitors, laptop screens, and legacy CRT monitors alike.

That said, I found that because the hinge was so loose, it felt more like I was attempting to balance the webcam on the top of my laptop rather than “clipping” it. With the USB cable tugging from behind, it also made for some strange angles at times. I never really felt that the webcam was held securely in place, but assuming that your screen doesn’t move around that much, the webcam shouldn’t fall off unexpectedly.

The Multimedia Headset
Wanna be balling like a secretary an executive assistant? This headset is a mono number that has a head-gripping piece on the other side. The microphone boom extends right next to your mouth, ensuring that even if you whisper, the person on the other end of your Skype call (or Windows Live Messenger or any VoIP application for that matter) can still hear you.

The microphone boom can swing both ways, so if you prefer to have the mic on your left or your right, you can have it whatever way you want. The sound quality coming out of the single speaker is perfectly suited for voice conversations, but I would have preferred a stereo headset so that I can use it for listening to music, watching videos, or playing games as well. A stereo headset with a microphone is an absolute must for communicating with your World of Warcraft buddies. Again, the build quality is fine, but it ultimately feels pretty cheap. That’s because the whole package retails for less than thirty bucks.

Conclusion
I’ve never been all that big on Skype conversations, but I do have video conversations with friends on IM programs from time to time. As I’ve noted above, the greatest shortcoming to this Skype-ready package is the fact that the resolution on the webcam is just CIF, interpolating stills to VGA. Given that so many webcams these days are capable of doing stills at 1.3 megapixels or better and most do video at VGA or better, the Philips SPC325NC comes up short. The plastics used also feel quite cheap and while I appreciate the swinginng arm on the webcam, it would have been better if the hinge wasn’t so loose. I feel that this package is mediocre for what it is, but the price is good.